Katora coffee shop owner, grateful for help in battling drug addiction, hopes to give back

THE FREE LANCE–STAR | by EMILY JENNINGS

Christian Zammas held out his arms. Scars covered both, but his left arm looked especially harrowing, with an angry patch of red from wrist to elbow.

“They told me if I’d waited any longer to come in that they would have had to amputate my arm,” Zammas said.

The North Carolina native, living in Raleigh at the time, had been shooting heroin, then migrated to krokodil, a deadly mix of drugs with a potent high that ravages the user, causing tissue surrounding the injection site to die. 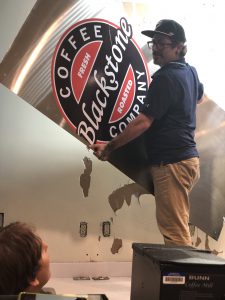 “This was true madness, it took away my reason,” Zammas said. “I had to do something to get out of that hole.”

The journey from where he was two years ago to business co-owner of Katora Coffee in downtown Fredericksburg is inspiring, and filled with organizations and individuals who reached out and helped.

“That’s why I want to give back, I want to do what I can to contribute and help others,” Zammas said.

Katora opened Dec. 11 in the space at 615 Caroline St., where Highpoint Coffee was located for several months last year. Ryan Mooney and his business, Kuleana, is their coffee roaster, and more than a dozen tea choices are offered there through Royal Tea New York.

Zammas, who worked as a chef in St. Louis, Ft. Lauderdale, Manhattan and Raleigh, also offers a menu of sandwiches, pastries, and a variety of vegetarian cuisine.

“Mandala Pies is also selling here, and we have a lot of gluten-free and vegan options,” Zammas said.

Co-owner April Sayler has worked with downtown artists to display their artwork in the shop and has developed a strong social media presence that they hope to continue growing.

The business will have a ribbon-cutting March 15. Katora has joined the Fredericksburg Food Co-op, supports Downtown Greens, and intends to involve itself with as many Fredericksburg events as possible, hoping to collaborate with other businesses and donate to community initiatives.

“So many people here in Fredericksburg have helped me and my family,” Zammas said. “It’s our community now and we want to radiate that feeling of community from here at Katora.”

Zammas came to Fredericksburg about a year ago to be near his two young sons, who were living with his ex-wife. At the time, he was fresh from rehab and destitute. The FCCR Rehabilitation Center, their medical treatment, counseling and group therapy made it possible for Zammas to feel like he had hope. The Thurman Brisben Homeless Shelter took him in and helped him get back on his feet professionally.

Zammas met Fredericksburg resident April Sayler in August, falling in love on one of their earliest dates at Highpoint Coffee. Soon the two of them were plotting to open a business together. When they learned that Highpoint was about to close, they jumped on the opportunity.

“They closed and we opened two days later as Katora,” Zammas said. “Everyone’s been so supportive, giving us great advice—the city has been wonderful.”

Zammas and Sayler are engaged, and live together in Fredericksburg with Sayler’s 5-year-old daughter, Sadie. Zammas’ two boys, ages 10 and 4, live with their mom in Mayfield, but Zammas spends time with them every day, particularly 4-year-old Nicholas, who stays with his dad while his mom is at work.

“As a chef, I missed everything in my kids’ lives,” Zammas said. “That’s one of the most wonderful things about owning our own business—we can truly be a family. We welcome kids here, we hope people will bring their kids and that it can be a place where families can be happy together.”

“This place, this shop, is a vessel, carrying us to a greater future,” he said. “We hope many others will join us on the journey.”